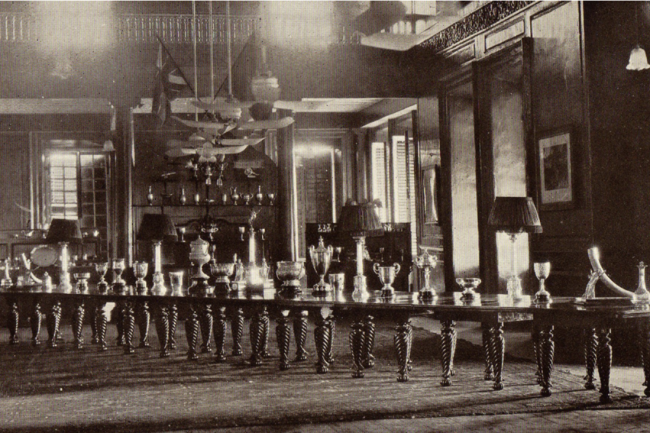 The Jhansi table (formerly the property of the Rajas of Jhansi) came into the possession of the 3rd Bombay European Regiment (subsequently the 109th Foot) during the suppression of the Indian Mutiny in 1858.

The Army Council was dissolved in 1964 and in 1973 the table passed into the custody of the National Army Museum (most of it being installed in the Reading Room and some components being held in store).

The Royal Asiatic Society acquired the table in 2007. The Society had relocated to 14 Stephenson Way, London in February 2007 and was anxious to acquire an appropriate table for its Council Room. The relocation of the Royal Asiatic Society coincided with the adoption of a plan to reorganize the reading facilities at the National Army Museum; this plan made the table surplus to the Museum’s requirements.

A detailed historical account of the table is at pages 23-25 of Military and Naval Silver: Treasures of the Mess and Wardroom by Roger Perkins (published privately by the author in 1999). A shorter account by Captain F C Hitchcock MC (probably written in the 1960s) seems to have passed to the Royal Asiatic Society with the table; this account was published in the Society’s journal in 2007.