It was traditional in the British Army for regiments to accumulate a large collection of silver trophies, candelabra and other silver items throughout the years. These were usually maintained in the Officers Mess and produced on formal occasions.

The Prince of Wales’s Leinster Regiment (Royal Canadians) was no different. Both the 1st and 2nd Battalions had large collections, many of the items collected before the creation of the regiment in 1881, when they operated as the 100th Regiment of Foot and the 109th Regiment of Foot.

When the regiment was disbanded in 1922, the question was what to do with the silver. The 1st Battalion handed over its Mess Plate, as the collections were called, to the London representatives of the Government of Canada, as a mark of affection for the country which gave birth to the 100th (Prince of Wales’s Royal Canadian) Regiment of Foot prior to 1881. That silver collection was passed to the Canadian Government is now held in the museum of the Royal Military College of Canada, Kingston, Ontario, not far from Toronto, where some of it is on display.

The Mess Plate of the 2nd Battalion was “deposited with the Mayor of Colchester with the intention of presenting it to the National Museum, Dublin, when conditions permit”. That collection is now with the National Army Museum in Chelsea, where some of it is on display and the rest in storage. The mystery was: How did it end up in Chelsea?

Contact was made with Colchester Borough Council to see what they knew about the silver collection. As there was nothing in their archives, they referred the matter on to Sir Bob Russell, former Liberal Democrat MP for Colchester, in view of his connections with the National Army Museum, but he too was unable to trace the Colchester movements.

At the suggestion of David Ball and Ian Lowe, contact was made with Lar Joye, the former curator of National Museum of Ireland – Decorative Arts and History Collection in Collins Barracks Dublin. He recommended a course of action which ended up solving the whole mystery.

Contact was made with the current Curator of the Military History Department of the National Museum of Ireland, Brenda Malone, and was back within days with details of the silver’s journey down through the years.

The last Commanding Officer of the 2nd Battalion , Lt Col Reginald Arthur Herbert Orpen-Palmer, and the last Second-in-Command, Lt Col Henry Walter Weldon, approached the National Museum of Ireland in 1922 and offered the battalion’s silver plate for exhibition and to be held in trust. The museum accepted the loan and the silver was on display in Kildare Street, Dublin from 1924.

So, the collection DID end up in Dublin as was originally intended.

In 1951 Col Raynesford, the Senior Trustee of the Leinster Regiment Memorial Fund requested the return of the collection to England, as a museum in The Royal Military Academy, Sandhurst had recently dedicated a section to the Irish Regiments.

The Museum in Dublin agreed to the request, with the approval of the Irish Department of Industry and Commerce, and the collection was transported to Major V.W.H Venour in London in 1952, c/o Cox & Kings Bank Ltd., Broadwick Place, London W.1. The collection consisted of at least 15 boxes.

In 1960 the National Army Museum was granted a Royal Charter and opened in purpose-built premises in Chelsea in 1971. Subsequently a number of items from the collection were put on display in Chelsea while some of it remains in storage.

Denis Kirby, with thanks to Lt Col Nick Weekes 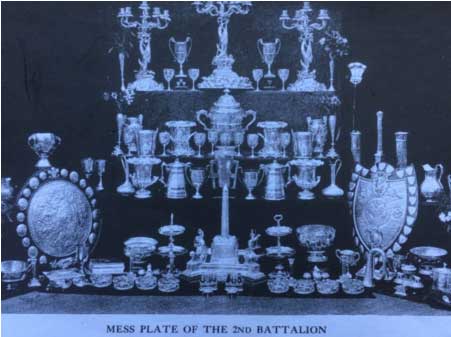