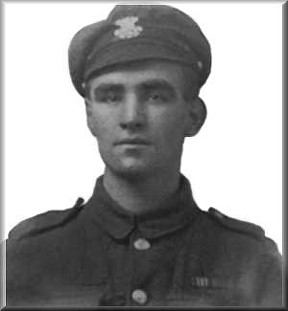 John O’Neill was born in Airdrie, Lanarkshire on the 10th February 1897 the son of Samuel O’Neill, a coal miner originally from Northern Ireland and his wife Agnes who came from Kirkcudbright.   At the outbreak of war in August 1914 John enlisted in the army and was posted to the 2nd Battalion The Leinster Regiment.

By 1918 he had attained the rank of Sergeant and had been awarded the Military Medal for his part in the capture of Hill 63 near Ypres on the 3rd September 1918. Early October 1918 found the Battalion, part of the 29th Division, taking part in the operations that led to the final breakout from the Ypres Salient. It was during this fighting that John O’Neill preformed two acts of heroism that earned him his Victoria Cross.

On the 14th October between the towns of Ledegem and Moorsele he led a small party of men to assault and capture of a German artillery position that was holding up the advance. Later, on the 20th October, he charged and captured a German machine gun position.

The citation for his Victoria Cross was published in The London Gazette on the 26th December 1918 as follows:

“For most conspicuous bravery and devotion to duty near Moorseele on 14th October 1918, when the advance of his company was checked by two machine guns and an enemy field battery firing over open sights. At the head of eleven men only he charged the battery, capturing four field guns, two machine guns and sixteen prisoners. Again, on the morning of the 20th October 1918, Sjt. O’Neill, with one man, rushed an enemy machine-gun position, routing about 100 enemy and causing many casualties. Throughout the operations he displayed the most remarkable courage and powers of leadership.”

Sergeant O’Neill was invested with his Victoria Cross by King George V in Buckingham Palace on the 2nd August 1919.

After the war John O’Neill rejoined the colours and served as an Armourer Sergeant in the Royal Air Force where T E Lawrence (of Arabia) was a colleague. At the outbreak of war in 1939 John O’Neill joined the Pioneer Corps with the rank of Lieutenant; it was during this service on the 16th October 1942 that he died of a heart attack at Hoylake, Wirral. He was buried in Holy Trinity Churchyard, Hoylake with a Pioneer Corps headstone. In 2004 the Leinster Regiment Association arranged for an additional memorial to be added to the grave noting John O’Neill’s connection to The Leinster Regiment.

In 1962 his medals which had been consigned to an auction house for sale were stolen together with a large quantity of other medals and coins and have never been recovered.