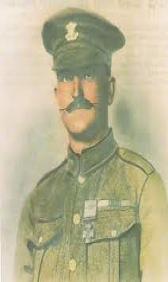 Martin Moffat was born in Sligo on 15th April 1882, and after attending a local school, he worked as a seaman on the steamship SS Sligo. In March 1913, he was involved in the Sligo dock strike when the crew demanded more help or higher wages for handling cattle. The dispute lasted 56 days but eventually an agreement was reached.

Shortly after the outbreak of war Moffatt joined the 6th (Service) Battalion of The Connaught Rangers. His Battalion was part of the 16th (Irish) Division and by December 1915 was in France on the Loos Salient. The next year the Division was heavily involved in The Battle of The Somme and then, in June 1917 the Battle of Messines, alongside the 36th Ulster Division.

The Germans launched a massive offensive all along the Western Front in the spring of 1918, and, although the Allies eventually halted the German advance, they took heavy casualties. By March, the 6th Battalion of The Connaught Rangers had been practically annihilated (in one week the battalion lost 22 Officers and 618 Other Ranks).

As a result, the survivors – including Moffat – were transferred into the 2nd Battalion of The Prince of Wales’s Leinster Regiment (Royal Canadians). As the Allies pushed the Germans back the occupied villages were fiercely fought over – the small village of Ledegem (occupied since 1914) was one such.

But, the Allies were determined to advance at all costs and as the “last big push” commenced in the early hours of the 14th October 1918, it was the 2nd Battalion The Leinster Regiment that fought its way into and through the village, pushing the German front line backward once more.

Moffatt’s section was held up by severe fire from a fortified farmhouse, when he decided to take matters into his own hands, as his Victoria Cross citation reads:

“For most conspicuous bravery and devotion to duty on 14 October 1918 near Ledegem, Belgium, Private Moffatt was advancing with five others across the open when they suddenly came under heavy rifle fire at close range from a strongly held house. Rushing towards the house through a hail of bullets, Private Moffatt threw bombs and then, working to the back of the house, rushed the door, killing two and capturing 30 of the enemy. He displayed the greatest valour and initiative throughout”.

Directly after his capture of the farmhouse and the 30 prisoners, Moffatt then insisted on marching back by himself a total of 120 prisoners, getting a receipt for them from the Assistant Provost-Marshal and re-joining his unit later that morning.

Moffatt was demobilised in 1919 and returned to a hero’s welcome in Sligo – attended by a huge crowd and a military guard of honour. After the war, Moffatt married and worked as a Harbour Constable until shortly before his death.

He was also awarded France’s Croix de Guerre and Belgium’s Military Decoration. His original medals are in the Lord Ashcroft VC Gallery in the Imperial War Museum, London, and copies are on display in the Sligo County Museum.