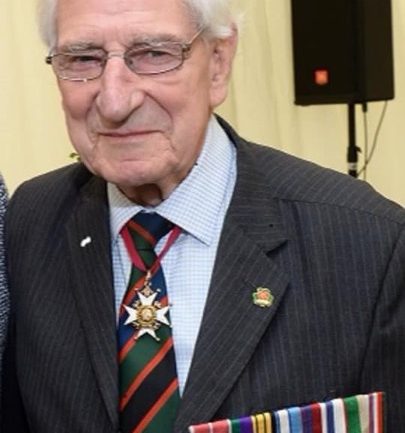 As The O’Morchoe, David was the hereditary chieftain of the Murphy* Clan – having succeeded to the title on the death of his father in 1970. He was President of the Leinster Regiment Association from 2003 until his death in 2019.

His father, Colonel Nial Creagh, was commissioned into The Leinster Regiment in 1914, before transferring to the Indian Army and, by 1928, was commanding a regiment of the pre-independence Indian Army.

David was born in Dublin in 1928. He and his brother Charles then spent their early childhood in India until they returned to Ireland in 1941 to attend St Columba’s College at Rathfarnham. (He continued to be closely associated with St. Columba’s, most significantly as a long-serving Fellow and Chairman of the Board.)

On leaving school in 1946, he joined the British Army – attending the Royal Military Academy, Sandhurst from there he was commissioned into The Royal Irish Fusiliers.

During his military career he served in the Middle East and Germany, commanded the 1st Battalion The Royal Irish Fusiliers and the 3rd Battalion The Royal Irish Rangers. He was an instructor at the Staff College, Camberley, and at the Royal College of Defence Studies. Between the years 1973 – 1975 he commanded the Army’s 16th Parachute Brigade, and his final military appointment was as commander of the Sultan of Oman’s Land Forces.

On retirement in 1979, he returned to live in Ireland where he represented the Royal British Legion as its President – achieving much by his style of quiet diplomacy. He dedicated his later life to the care of British ex-servicemen and woman and their dependants. Amongst his many other interests, he was active in the affairs of the Church of Ireland – serving on the General Synod, and was chairman of the Standing Council of Irish Chiefs.

During the state visit of Her Majesty The Queen to Ireland in 2011, The O’Morchoe took her on a guided tour of the Irish War Memorial Garden at Islandbridge, Dublin.

When the Leinster Regiment Association was re-formed in 2003, he was appointed its first President and worked actively to expand the Association across Britain and in Ireland.

The O’Morchoe was in his 92nd year when he died after a short illness at his home outside Gorey, Wexford, in 2019.

*Murphy is the anglicised version of two Irish surnames, O Murchadha (in modern Irish O Murchu) and Mac Murchadha, both derived from the popular early Irish personal name Murchadh, meaning “sea-warrior”. The origins of the title go back as far as 1461, if not further, and the O’Morchoe version of the name was adopted by deed poll by his grandfather in 1895.