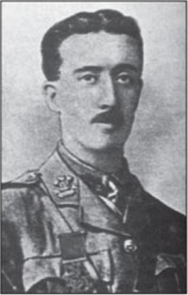 John Vincent Holland was born on the 19th July 1889 in Athy, Co Kildare, the son of John Holland a veterinary surgeon and farmer and his wife Catherine. He was educated at Clongowes Wood College and Liverpool University where he studied to be a vet. Leaving university before taking a degree he went to South America where he became involved in building railways.

At the outbreak of war in 1914, he returned to the United Kingdom and enlisted in the 2nd Life Guards – thus giving rise to his later nickname of “Tin Belly”. On the 13th February 1915 he was commissioned 2nd Lieutenant in the 3rd Battalion The Leinster Regiment. He was then attached to 2nd Battalion The Royal Dublin Fusiliers and was wounded during the 2nd Battle of Ypres.

On his recovery he was posted to 7th Battalion of the Leinsters and whilst serving with them won his Victoria Cross leading a bombing party during the assault on the village of Guillemont during the Battle of the Somme on the 3rd September 1916.

The citation published in The London Gazette on the 26th October 1916 reads as follows:

“During a heavy engagement, Lt. Holland, not content with bombing hostile dug-outs, fearlessly led his troops through our own artillery barrage and cleared a great part of the village in front. He started out with 26 troops and finished with only five after capturing some 50 prisoners. By this gallant action he undoubtedly broke the spirit of the enemy and saved many casualties.”

He was promoted Captain and returned home to Ireland to a hero’s welcome particularly in his home town of Athy. In January 1917 he married Frances Grogan, a Cork girl, the couple subsequently had two sons.

John Holland left the Army in 1922 and worked as a civil servant during the inter-war years. With the outbreak of war in 1939, he re-enlisted and served with the Royal Artillery in an Anti-Aircraft Regiment and then transferred to an armoured cavalry regiment –  10th Duke of Cambridge’s Own Lancers (Hodson’s Horse) – in the Indian Army before being discharged in 1941. He spent the remainder of the War working for the Ministry of Food. His eldest son Major Niall Holland MC was killed in action while serving with the Indian Army in Burma.

John Holland spent his final years in Tasmania where he died in 1975, his wife having predeceased him. He was buried with full military honours in Hobart, Tasmania.

The whereabouts of his Victoria Cross is unknown.