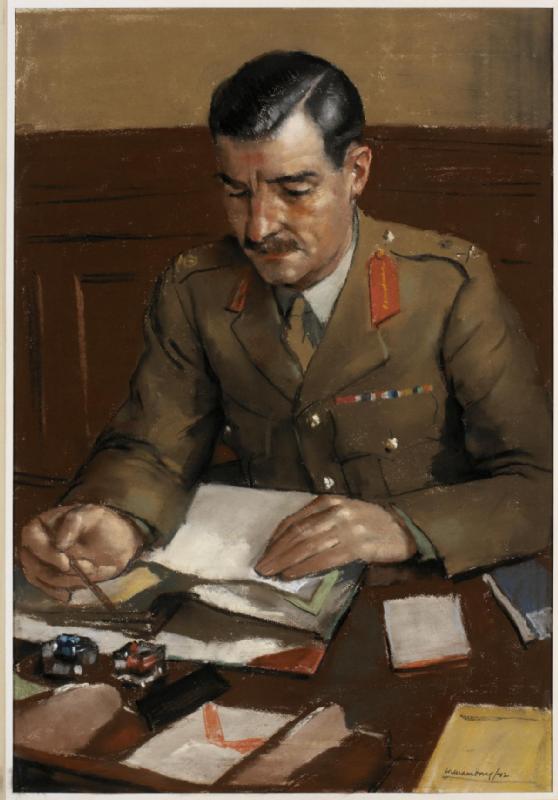 Archibald Edward Nye was born at Shipstreet Barracks in Dublin in 1895. As he came from an Army background, Nye was educated The Duke of York’s Royal Military School.

He then became an Army schoolmaster, deploying to serve with the British Expeditionary Force in 1915. Later that year, he was selected for a field  commission in The Prince of Wales’s Leinster Regiment. He was posted to the 2nd Battalion, rising to the rank of acting captain by 1917 and also been wounded twice.

The list of the bravery awards to the 2nd Battalion of the Leinsters is an indication of the ferocity of their fighting between 4th September and 11th November 1918 – two Victoria Crosses, two Distinguished Service Orders, thirteen Military Crosses, six Distinguished Conduct Medals, thirty-nine Military Medals and three bars to the Military Medal.

Nye was the recipient of one of those Military Crosses and his citation reads:

For conspicuous gallantry and devotion to duty on 20th October, 1918 near Esscher. He [Nye] made a reconnaissance, under heavy shell and machine-gun fire, of the forward positions along the whole battalion front adjusting a portion on his own initiative to complete the line. He was of great assistance to his commanding officer throughout the week’s fighting.

On the disbandment of The Leinster Regiment in 1922, Nye transferred to The Royal Warwickshire Regiment and held various regimental appointments. Promotion in the inter-war years was slow and involved a bewildering mixture of local, brevet and substantive ranks. However, he followed the path of a successful career soldier and completed the course at the Staff College at Camberley in 1925. He also found time to study law and was called to the Bar at the Inner Temple in 1932 (a qualification he was to later find particularly useful as Governor of Madras). Various other appointments included the Directorate of Training at the War Office, a return to the Staff College as an instructor and then command of the 2nd Battalion of The Royal Warwickshire Regiment.

In 1939, he was given command of the Nowshera Brigade in India, but on the outbreak of war his proven qualities as a staff officer were required in the War Office back in London. A year later he had become Director of Staff Duties with the acting rank of Major-General – reporting directing to a fellow Leinster – General Sir John Dill who was by then Chief of the Imperial General Staff (CIGS).

Although Nye wanted to be released to command an infantry division this was not to be. When Dill was sent to America, Churchill believed that Nye – despite his lack of seniority – was the man to be the next CIGS. However, Dill felt General Sir Alan Brooke to be the better choice and consequently Nye became Vice-Chief of the Imperial General Staff (VCIGS) with the rank of Lieutenant-General.

On his appointment, Nye received some 2,000 letters of congratulations – including over 200 from officers and men who had served with him in The Leinster Regiment. Nye and Brooke were a very effective working partnership for the remaining four years of the war with the former shouldering most of the responsibility for the Army thus freeing up the CIGS for wider operational responsibilities.

By 1945, Nye had established a formidable reputation within the corridors of power and seemed the natural choice to succeed Brooke as CIGS. However, Field Marshal Montgomery had his eye on the post and so Nye had to content himself with some other senior position. Attlee was by then Prime Minister and felt that a man of Nye’s calibre could render valuable service in the imminent handover of power in India. Retiring from the Army in 1946, the 50-year-old Nye was appointed Governor of Madras.

The Province of Madras covered an area somewhat larger than that of the British Isles; the population at the time was about 50 million (much the same as the population of the United Kingdom in 1946). The new Governor quickly gained the confidence of the Indians and developed a close working relationship with Jawaharlal Nehru – the first Prime Minister of independent India. His term of office was plagued by constant communist inspired peasant uprisings and industrial unrest throughout the province. Also, he fought to protect the appointment of judges from political interference.

Nye retired to Wiltshire where he continued with a busy schedule by serving on public bodies, chairing a committee reviewing the War Office functions, and several commercial directorships. He died aged 72 in 1967.

A lengthy obituary was published in The Times and a shorter supplementary tribute appeared two days later. The latter included the following assessment of this distinguished Leinster: He combined a penetrating and incisive intelligence with unfailing kindness and a lovely sense of humour. If ever there was a balanced and wise man it was Archie [Nye].