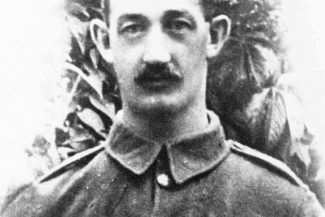 John Cunningham was born in Thurles, Co Tipperary on the 22nd October 1890 one of five children of Joseph and Johanna Cunningham. He was educated at the Christian Brothers School in the town and, before enlisting in the army, worked as a farm labourer.

At the outbreak of war, he joined the 2nd Battalion The Leinster Regiment and served with them in France from December 1914. In 1917, his battalion took part in a flanking attack at Bois-en-Hache in support of the attack by the Canadian forces on Vimy Ridge, a key component of the Battle of Arras.

On the 12th April 1917, Corporal John Cunningham was in charge of a Lewis Gun team on the most exposed flank of the battalion’s attack when they came under heavy enfilade fire. It was for his bravery during this and subsequent fighting that he was awarded the Victoria Cross.

The citation in The London Gazette, published on the 8th June 1917, reads as follows:

“For most conspicuous bravery and devotion to duty when in command of a Lewis Gun section on the most exposed flank of the attack. His section came under heavy enfilade fire and suffered severely. Although wounded he succeeded almost alone in reaching his objective with his gun, which he got into action in spite of much opposition. When counter-attacked by a party of twenty of the enemy he exhausted his ammunition against them, then, standing in full view, he commenced throwing bombs. He was wounded again, and fell, but picked himself up and continued to fight single-handed with the enemy until his bombs were exhausted. He then made his way back to our lines with a fractured arm and other wounds. There is little doubt that the superb courage of this N.C.O. cleared up a most critical situation on the left flank of the attack. Corporal Cunningham died in hospital from the effects of his wounds.”

Taken to a Field Hospital at Barlin John Cunningham died there on the 16th April 1917 and was buried in Barlin Communal Cemetery. As he was unmarried, his mother was presented with his Victoria Cross by King George V at Buckingham Palace on the 21st July 1917. Sadly, one of his brothers also died during the war.

His Victoria Cross is on display in the Lord Ashcroft Gallery of the Imperial War Museum, London.